Meet The Riders - Jimmy, Atlanta, US

BO B.
(halfbiker) 3 months ago
Jimmy is an engineer, owner of an entertainment center and our super positive Atlanta based ambassador. His hobbies include riding the Halfbike, watching others try to ride it, and begging his wife to ride his Halfbike. :) If you're in the area, feel free to contact him for a test-ride. I never imagined that I would form a human-machine bond with my Halfbike. I thought it’d be fun and unique and physically beneficial to own one and ride it on the weekends but... it breathed new life into my weekends AND into my daily life as well. I can’t wait to ride it after work and during both days of the weekend. When I ride it, I feel like a bird flying over the water. Just gliding. When I travel for business, I miss riding my Halfbike but when I once brought it with me on a business trip by car - I rode it in the hotel parking lot and ended up watching ALL the hotel workers and guests from the lobby come out and cheer. I allowed a few of them to get a brief lesson in Halfbiking and even filmed a couple. I didn’t get to ride my Halfbike much that day but many others did get to try it. The look on people’s faces..... was priceless. 1. Tell us a little bit about yourself (job, hobbies, etc.) . Where are you from? I was born in Odessa, Ukraine, USSR in 1963. I emigrated to the United States in 1979 and have been living in Atlanta, Georgia ever since. I graduated Georgia Institute of Technology with a degree in Electrical Engineering and later received a Masters in Business Administration (MBA) from Georgia State University. Worked for Ricoh copiers company as a director of engineering, then raised capital and opened my own entertainment center (Jimmy’s Mad Mad Whirled). Over the last 10 years I have been testing and commissioning electrical systems and equipment for world Fortune 100 technology companies starting or expanding their presence in the Data Center (the cloud) business. Companies like Facebook, Microsoft, Twitter, AT&T, and others. My hobbies are RIDING MY HALFBIKE, watching others try to ride my Halfbike, begging my wife to ride my Halfbike :-), training both of my kids to ride my Halfbike (whenever they are in town). Also, I am a three times Georgia champion in Fencing (sabre). I had done fencing since I was 9 years old but, after 4 ACL tears and surgeries during soccer and fencing tournaments (and an Achilles tear in a not-too-long-ago fencing tournament) - my wife banned me from fencing and soccer. In addition to riding my magic Halfbike, I love snow skiing, watching Netflix, reading English and Russian books, and enjoying life. 2. How did you hear about Halfbike? What made you commit to this new sport? What's your favorite thing about it? I kept my eye on the Halfbike Kickstarter campaign and finally decided to try it. The first week of learning to ride it - I lost 6 pounds. I was determined to ride it every single day and I did. The feeling of mastering it was awesome. I felt like a bird which learned how to fly. My favorite thing is the feeling of flying when I am on it. Also, I love to see people’s faces when I ride past them. If they give my Halfbike a long look - I turn around and stop and ask them if they know about it. Occasionally, they look interested enough for me to offer them a ride try. Its uniqueness, physical benefit, feeling of freedom and flying are my favorite things. 3. How did your commute/habits change since you got on a Halfbike? How did it look before that? I don’t use my Halfbike for commuting. I only use it for fun, enjoyment, exercise, and the feeling of achievement. 4. Anything else? (add anything you'd like to say) In the future, when my job trips will take me to other states for 3-6 months at a time - I will have one Halfbike at home and one at the hotel/apartment where my job will be. I am just amazed how this 57 year old guy (me) is acting like a kid with his new toy.
Kevin W.
(halfbiker) 3 months ago
Jimmy, I love your story and I also love Russian literature. The horns look great! Question for you, what did you use to secure the water bottle holder? Thank you, Kevin 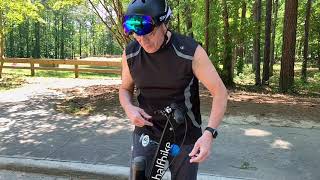 Jimmy G.
(ambassador) 3 months ago
Hi Kevin. Thank you so much for your interest. I still read Russian books but lately Netflix comes up with more shows I want to watch :-) I used long, wide zip ties to secure a water bottle holder ( bought it at a bike store). Then, later, I found a water bottle that fit VERY TIGHTLY, into the holder. They were bought separately but I married them. :-) I show a closeup of that assembly in a video on my YouTube channel: HalfBiker Jimmy. youtu.be/MMdfpExvwB0 Happy Halfbiking. Cheers
ALESSIO L.
(ambassador) 1 day ago
hi Jimmy, happy to meet you here. I have been following you with interest for some time and I have seen all your videos, congratulations for your patience and perseverance to spread the word ... I am writing to you from Sicily, in Italy where HalfBikes meet with the same ease with which I could meet an armadillo ... ehe he hhe :-) never!
Log in to Reply
Back to top
.